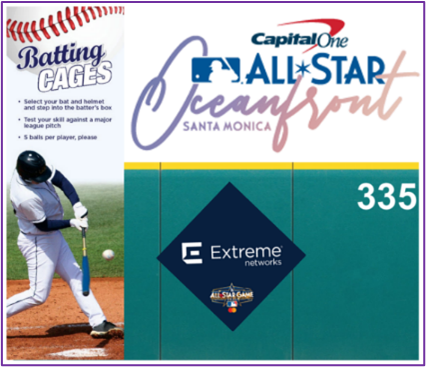 July 15th marks the start of MLB All-Star week in Los Angeles, California! Extreme Networks is excited to share that we will be there to help power the week’s events and the Midsummer Classic.

All-Star Week begins at All-Star Oceanfront as MLB takes over the Santa Monica Pier and the surrounding beach area, bringing baseball to the local community. Extreme will be on the pier as the Batting Zone sponsor. Here fans can take their best hacks in the batting cage to see how they measure up to Major League pitching. Our All-Star Game branded access points will be on the batting cage while Wi-Fi Ambassadors share with fans how Extreme powers in-game connectivity for coaches and players in dugouts and bullpens.

Learning from the Best!

On Saturday, July 16th Extreme and the Major League Baseball Players Alumni Association will host a Legends for Youth baseball clinic at Downey High School. The free clinic will run from 9:00 a.m. to 12:00 p.m. with an expected attendance of 150 Downey ISD students. The Legends for Youth clinics are conducted all over the world with former Major League Baseball players providing instruction as well as sharing their life experiences and the lessons they’ve learned from the playing field to their post playing careers. As a former MLB player, there is no greater reward than to pass along my knowledge of the game to young ballplayers but more importantly, share how overcoming obstacles and adversity in the game is a valuable tool for life.

Play Ball Park also kicks off on Saturday in downtown LA at the Los Angeles Convention Center. For the second year in a row, Extreme will be the gaming zone sponsor where fans of all ages can play MLB the Show with their favorite current or legendary MLB players. The gaming zone at Play Ball Park is where traditional sports meet eSports.

Saturday will also include events at Dodger Stadium: the Futures Game followed by the Celebrity Softball game. Extreme will have two activation areas, one in right field and one in leftfield. Look for fans waving purple towels as homeruns sail into the outfield bleachers. Our Wi-Fi coaches will be on-site helping fans with their Ballpark App.

Extreme provides in-game wi-fi across the entire league for over 2,500 games during the season!

Coming to a Ballpark Near You!

Monday, July 18th kicks off the Extreme NOW roadshow season at the LA Coliseum.. Look for Extreme NOW events coming to a ballpark near you in the second half of the MLB season.

Back at Dodger Stadium, the Home Run Derby takes place Monday evening as today’s biggest power hitters battle it out to be the crowned Home Run Derby champion. Extreme Networks Wi-Fi coaches will be roaming the left field and right field concourses with purple Extreme branded towels as baseballs fly into the sea of fans.

Rounding out MLB All-Star week on Tuesday, July 19th, Extreme will host a CIO technology summit where technology leaders from across major sports organizations and teams will gather to share industry trends and cover top of mind topics. MLB All-Star Week comes to an end with the Midsummer Classic as the National League’s best takes on the American League’s best and sets the stage for postseason baseball.

From July 15th to July 19th, Extreme Networks will play an active role around the Los Angeles communities by hosting various events around the All Star Week festivities. From helping fans optimize their technology, giving back to local high school communities, and hosting a variety of fun activities, we look forward to being an integral part of the 92nd MLB All Star Game by taking the experience beyond the ballpark