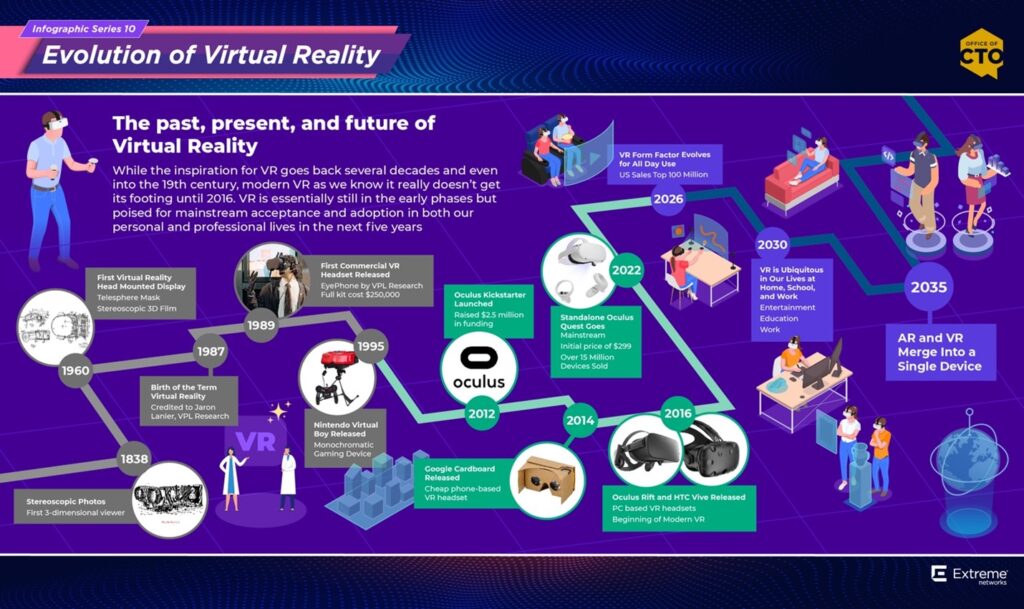 Extreme Networks Office of the CTO, Guest Blog: Tom Brannen is an independent industry analyst focusing on enterprise collaboration technologies. You can reach Tom at www.onconvergence.com

While virtual reality (VR) and augmented reality (AR) often get lumped into the same category, they are two different technologies with different hardware, software, and use cases. They also have two unique journeys, running parallel over the last half a century. Both VR and AR have moved from fiction to research projects and now consumer-ready devices that are being adopted worldwide for personal and business use. The modern versions of both VR and AR are in their very early stages. They have been around for only six and three years respectively, with the Rift/Vive being the first VR device to be released, and the HoloLens 2 being the latest augmented reality device released by Microsoft.

While the inspiration for VR goes back several decades and even into the 19th century, modern VR as we know it doesn’t get its footing until 2016. VR is essentially still in the early phases but poised for mainstream acceptance and adoption in both our personal and professional lives in the next five years.

We have created an infographic about virtual reality (VR) to show how the technology has evolved over time, from its earliest days toward a glimpse of the future. In a follow-up blog, we will share a timeline infographic about augmented reality (AR).

While it is difficult to predict the timing of future developments in emerging tech, over the next decade, both AR and VR will eventually become the centerpiece of our digital lives in the future. The devices we use today will be replaced by AR/VR devices, providing us with captivating experiences at work and home that we can’t even dream of today.

You can grab the full PDF version of this VR infographic via the link below. So, please take a moment to download the PDF, print it out in full color, and display it in your office. And don’t forget to share it with all your techno peers, who might also want to explore the new virtual worlds of the future.