Isolated nodes are not currently supported when deploying Ansible Tower in OpenShift.

Ansible Tower leverages the autocomplete=off attribute on forms to relay to the browser that it should not autocomplete the fields within that form. In some scenarios, however, the browser may ignore this setting and attempt to save and/or autocomplete fields. This tends to happen on forms that appear to contain login fields like username and password, such as the User form and some Settings forms. Further investigation is underway to deliver options that prevent this behavior.

To access Tower nodes behind your load balancer (in traditional cluster Tower installs) via HTTP, refer to the procedure described in the Troubleshooting section of the Ansible Tower Administration Guide.

When passing a limit to a Sliced Job, if the limit causes slices to have no hosts assigned, those slices will fail, causing the overall job to fail.

Default LDAP directory must be configured to use LDAP Authentication

Tower 3.3 introduced the ability to configure multiple LDAP directories for authentication–up to six. On the settings page for LDAP, there is a “Default” LDAP configuration followed by five-numbered configuration slots. If the “Default” is not populated, Tower will not try to authenticate using the other directory configurations.

After starting an isolated job, if an event impacts the availability of the controller which manages the job, Tower will be unable to determine the status of the job, and manual intervention will be necessary. Contact Ansible via the Red Hat Customer portal at https://access.redhat.com/ for instructions specific to your scenario.

If placing Tower nodes behind some sort of proxy, this may pose a security issue. This approach assumes traffic is always flowing exclusively through your load balancer, and that traffic that circumvents the load balancer is suspect to X-Forwarded-For header spoofing. See Proxy Support in the Ansible Automation Platform Installation and Reference Guide.

When Tower is accessed via hostname only (e.g. https://my-little-tower), trying to read the SAML metadata from /sso/metadata/saml/ generates a sp_acs_url_invalid server error.

A configuration in which uses SAML when accessing Tower via hostname only instead of an FQDN, is not supported. Doing so will generate an error that is captured in the tower.log file and in the browser with full traceback information.

Live event status dots are used for troubleshooting problems with your Tower instance and the socketio logs can point out anything problematic. You can collect troubleshooting help by running a sosreport. As root, run the command sosreport from your system to automatically generate a diagnostic tar file, then contact Ansible’s Support team with the collected information for further assistance. For more information on sosreport, refer to sosreport in the Ansible Tower Administration Guide.

If you have a VMware instance that uses a self-signed certificate, then you will need to add the following to the Source Vars configuration of the Cloud Group:

You can set this in inventory source for VMware vCenter as follows: 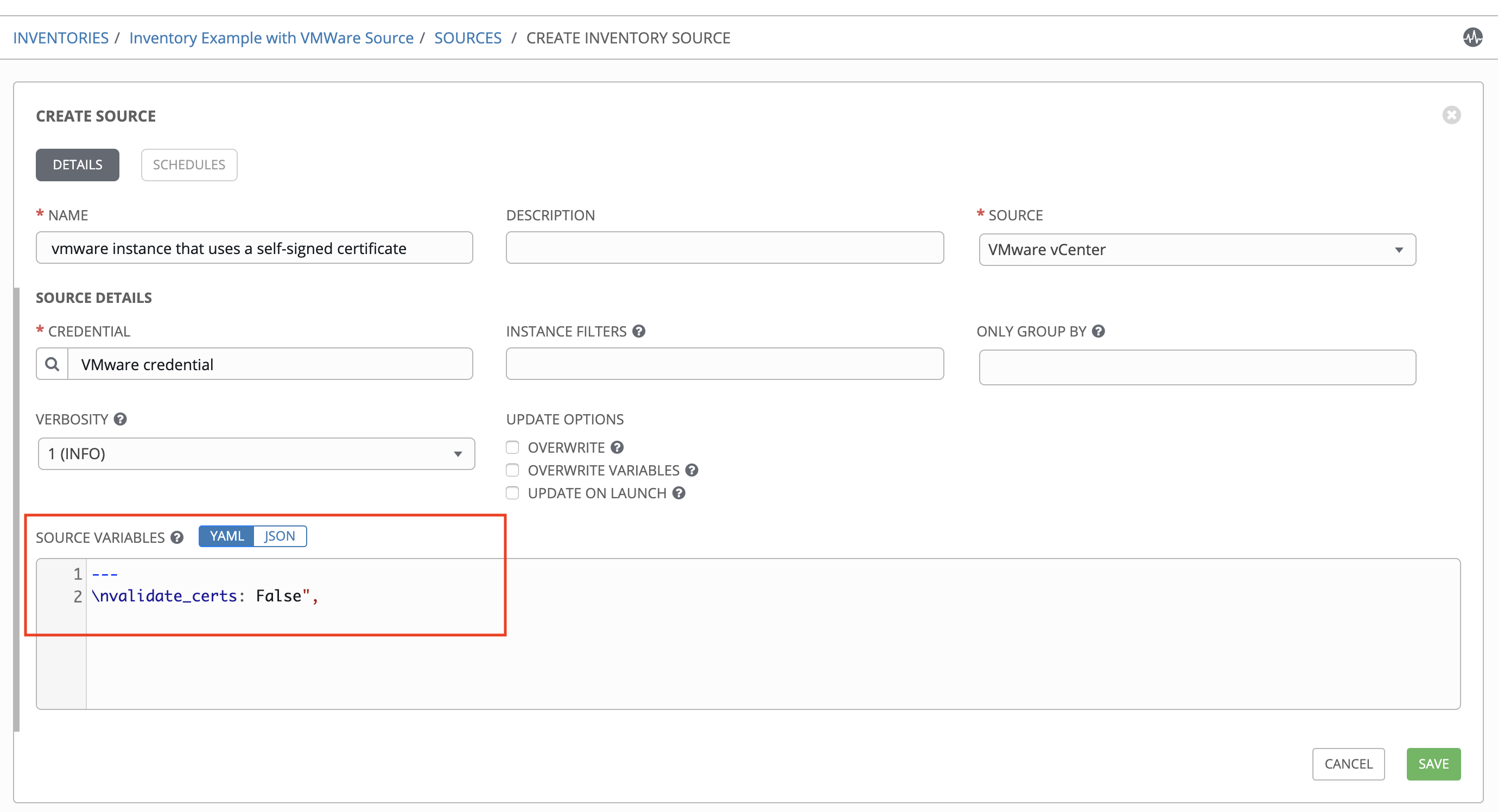 This error is the result of Safari silently refusing to establish a connection to a web socket that is using a self-signed certificate. To resolve this issue, you must set Safari to always trust the website upon first visiting it:

If you click Continue without checking the checkbox, this error will persist. 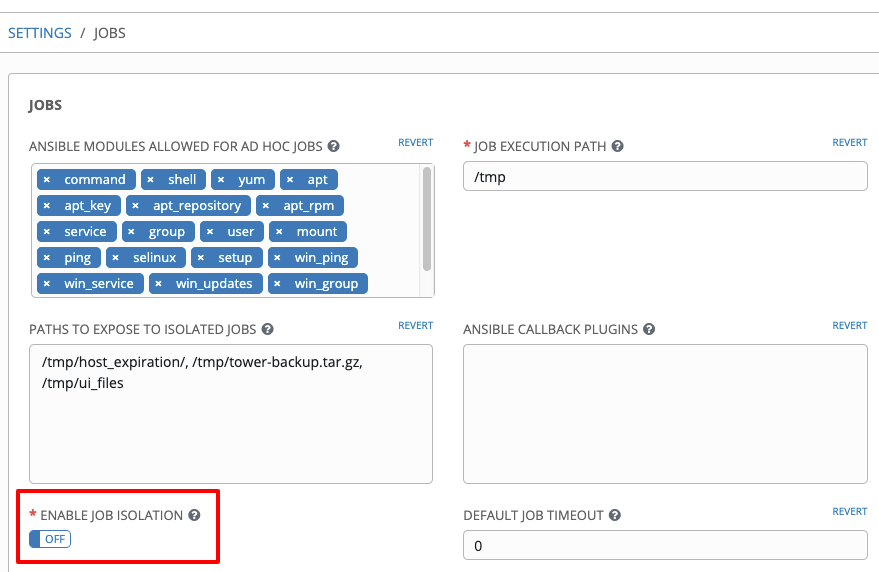 Click Save to save your changes and restart services.

The Job Isolation functionality in Ansible Tower limits which directories on the Tower file system are available for playbooks to see and use during playbook runs. If you are attempting to customize SSH behavior by using a custom SSH configuration in the Tower user’s home directory, this directory must be added to the list of directories exposed by bubblewrap.

For example, to add a custom SSH config in /var/lib/awx/.ssh/config and make it available for Tower jobs, you can specify the path in the Job Execution Isolation Path field accessed from the Jobs tab of the Configure Tower screen:

If you are using the bundled installer for Ansible Tower, note that only Red Hat Enterprise Linux and CentOS are supported. Ubuntu support has been discontinued as of Ansible Tower 3.6.

Reactivating OAuth authentication accounts which have been deleted

Using vaulted variables in inventory sourced from a project

When using inventory from a source control project, individual vaulted variable values are supported. Vaulted files are not currently supported.

The Ansible Tower credential type in Ansible Tower 3.4 does not support use with an OAuth2 Token. Only username + password is currently supported.